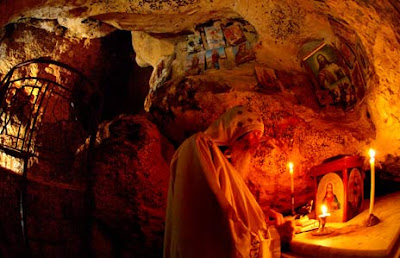 Coptic solitary Fr. Lazarus St. Antony is the most interesting Coptic monk you've never heard of. He lives in the mountain cave once inhabited by St. Anthony the Great and is sometimes referred to as "the last anchorite." Thanks to the Cobwebs From An Empty Skull blog, I learned that he was recently featured on BBC’s “Extreme Pilgrim” program, hosted by Pete Owen-Jones, a vicar of a parish in Sussex, England.

Father Lazarus has been living in solitude at a distance from St. Antony's Monastery for several years. He is a non-Egyptian born in Tasmania, Australia and spent about forty-years of his life as an atheist and a professor. After his mother was diagnosed with cancer and died, he abandoned his life in Australia and went in search of God and peace. His spiritual journey led him, ultimately, to life as Coptic monk. He eventually met H.H. Pope Shenouda III, who guided him to where he is today.

His incredibly interesting and inspiring journey is featured in the book Desert Father: In the Desert with Saint Anthony

. It is highly recommended.
Posted by Nader Alfie at 11:14 AM

Email ThisBlogThis!Share to TwitterShare to FacebookShare to Pinterest
Labels: Monasticism

I got to spend time with him back in 2000 while he was serving in Tanzania. His story is truly amazing. Do you know how we could get our hand on a copy of BBC’s “Extreme Pilgrim” program?

Please, post any info about this broadcasting. I really want to see it!
Thanks :)
-Ray

I'm glad you're excited about this...two things, Abouna Lazarus does not live in the cave that was inhabited by the Great Saint Antony. He prays Liturgies there on Saturdays, but he lives in his own cave during the hotter days and up in a new hermitage he's made near the cave in the cooler days.

While "Desert Father" may be a good read, the author doesn't really "get" Abouna Lazarus. I discussed the book with him, so it's not just "my humble opinion"! lol

Please pray for me,
Fortunatus

Do you know how people might be able to see the video?

Thanks also to "Faith" at copticheritage.org for her help.

I am Coptic Orthodox.... I LOVE YOU WITH ALL OF MY HEART... I never read for fun, but I'm considering buying Timothy Keller's new novel... "The reason for God".... Do you know Timothy Keller or any of his work? Basically, I'm requesting a recommendation from you.

Jesus was humble... to be humble on the internet, you must have no face :)

I do recommend Timothy Keller's book. I know he has other titles, but I am not familiar with them.

As far as a recommendation, it would depend on what genre of book you are looking for. Please tell me more.

Just wanted to thank you for posting this info. I recently watched the Extreme Pilgrim documentary featuring Fr. Lazarus and found it profoundly moving. I've thought of Fr. Lazarus and his wisdom often and found this information really interesting.

I just now stumbled across your blog and am glad to have found it. I look forward to reading more!

Thank you for your kind words and encouragement. Take care.

Read Tim Keller's book with caution, because he is not Orthodox; he is Reformed and Presbyterian, so what he believes about God and how we know Him will be completely different from the Patristic understanding. I'm sure he has some good stuff to say, but read discerningly.

I, too, am an anchorite. I remain enclosed for the overwhelming majority of my time; I order food on the Internet and only go out for essentials. I have written about sixteen books on spirituality, especially Roman Catholic. I would like to get in touch with other anchorites, so please write to me here:

I would love to share notes and rejoice together in the Lord! The website is fledgling; return to it when I have entered more information.

I have watched this video and it has been life changing. Though not ortbodpx I will be converting some day. Thans great blog

Thank you for your encouragement, Jonathan.

The whole series is now available on YouTube. Search it

Join US in Building a Home for the Precious Orphans of Egypt!