THERE IS NO NEED to "report" the bombing at the Church of the Saints in Alexandria, Egypt, the latest in a series of terrorist attacks against Coptic Christians inside Egypt. Clearly, the issue has garnered attention outside Egypt. 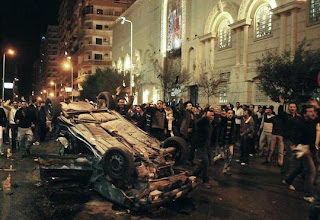 President Obama has issued a statement, condemning the attacks. Pope Benedict XVI has also weighed in. The Christian Science Monitor is calling for prosecutions. Fox News and MSNBC have also addressed the issue.

Speaking to Al Ahram, His Holiness Pope Shenouda III said, "The slogans used by some [Coptic protesters] have transgressed all values and modes of behavior... and some have tried to resort to violence, but violence is absolutely not a method of ours." He added

We can not prevent people from expressing their sorrow, yet I ask them to express their feelings without violence. I am glad that many Muslims joined [in the protests] which shows that all are against terrorism and sectarian violence. The attack brought us together and we have to unite against the enemy that aims to weaken our bonds.

He also expressed views regarding the government's role: "I believe that the state has a duty to solve Copts' problems," adding, "We all believe in the rule of law and the importance of law and order. A state would collapse if the law was not implemented, but we want equality. Additionally,

Citizenship is a great principle, but many don’t understand it, for it means equality.We must be alert to all kinds of discrepancies taking place in the our society. We should face problems and work on solving them because if we just ignore them, it will get worse.

The National Democratic Party's Policies Committee Chairman (and presumptive future Egyptian president), Gamal Mubarak called the attack "heinous" and asserted that everyone behind the terrorist attack will sooner or later be brought to justice. 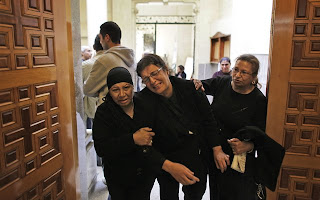 Many here in the U.S. have suggested exerting pressure by whatever dignified means available. Among the options suggested was a letter campaign, directed to U.S. congresspersons. While I think this is helpful and necessary, President Obama and the U.S. Congress are preoccupied with resolving other important issues, such as those concerning healthcare and the economy, as well as the growing concern over Iran, North Korea, and domestic security. The concerns of their American constituents and (realistically) their own political well-being will dominate their efforts.

In the end, Egypt's destiny will, for better or worse, be decided by and among Egyptians. Encouragingly, many in the mainstream Egyptian media have begun to express the an appropriate level outrage. Among them are Amr Adeeb and, his wife and colleague, Lamis Elhadidy:

With a burdened heart, I ask you to join me in praying and advocating for Egypt, my people.
Posted by Nader Alfie at 7:15 PM

Thanks for this Nader. I thought of you when I heard the news of this. I hope that the international attention has a positive effect: all too often the hot air of media attention can fan the flames.

Thank you for thinking and commenting on this, Jeff.

As a runner and a socially-conscious person, I know you appreciate the line between indifference and hyperbole.

Join US in Building a Home for the Precious Orphans of Egypt!